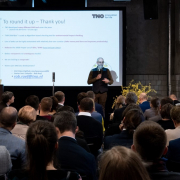 Utilizing Building Information Models (BIM) to automate the building permit process may be the “killer app” for BIM that many of us have been waiting for. Earlier experiments of BIM-based Model Checking (BMC) solutions in Norway, the Netherlands and Singapore have clearly identified that a digital process can be expected to be faster and cheaper than manual processing. The results indicate that development of an automatic compliance-checking platform will return ten times the investment required.

Many building authorities around the world have started taking the first steps towards implementing BMC in the building permit process and at the BIM-based Building Permit Process Automation Seminar in Tallinn, Estonia on February 20th they shared some of the latest developments and best practices. Around 130 participants from 14 different countries took part in the seminar on-site and over 220 attended on-line from 25 different countries. The surprisingly high level of attendance shows that this is a hot topic around the globe and many public authorities want to take advantage of BIM to speed up the permitting process. Prototype solutions were presented from Estonia, Finland, Germany, Netherlands and UK. All presentation along with the video recording are available on the event website.

The event was kicked-off by Jaan Saar with a short introduction about the EU BIM Task Group followed by Richard Petrie and Nicholas Nisbet from buildingSMART International (bSI) highlighting the need for open & neutral data exchange. It was great to have the Chief Executive of bSI start the seminar because open standards, especially IFC, were a common theme throughout all presentations. This was a key takeway that IFC was the standard of choice for most public authorities. Tomi Henttinen from buildingSMART Finland also noted in his presentation that without good BIM standards it is not possible to reach full automation.

Jaan Saar and Rick Klooster presented the Estonian proof-of-concept (POC) web solution based on opens source components (BIM Server, BIM Surfer, Voxel Server). The POC solution was developed by the Estonian Ministry of Economic Affairs and Communications in 2019 with the help from the European Structural Reform Support Programme. Although Estonia already has a fully digital building permit process it is still based on “digital paper” (DWG-s, PDF-s) and the design drawings submitted with the building permit application have to be reviewed manually. The POC demonstrated that using smart algorithms to checks BIM models can automate many (if not all) of the labor intensive manual checks. The POC also highlighted the benefits of algorithm-based checks which are less sensitive to BIM errors compared to strictly rule-based checks. Estonia plans to implement BIM-based model checking in the existing building permits system in 2021.

Pekka Virkamäki and Jekaterina Masjagutova from the City of Vantaa showed a rule-based workflow for permit checking using Solibri Model Checker. They started doing 3D inspections with Solibri already 2 years ago (2018) as part of a KIRA-digi prototyping project and results have proven a time saving of at least 20% compared to the traditional process. Vantaa also utilizes the 3D city model to visualize the planned building along with the surrounding environment.

Michael Theiler from Planen-Bauen 4.0 gave a detailed overview of how they plan to seamlessly integrate BIM into the official building application process using XPlanung and XBau systems in Germany. The research project was started in 2018 and lasts until 2020 but already a working software solution was demonstrated. The solution has lots of functionality and the first piloting is being done in Hamburg.

Rob Roef from TNO explained how algorithmic based checking of BIM can save a lot of time and add transparency, which translates into less end user stress. Rob also did a great job explaining how AI works and how it could be applied to automate the process using open-source BIM bots, the same technology used in the Estonian POC. Another example is the “MPG BIM Bot” which is an algorithm based tool for environmental impact checking in the Netherlands.  An MPG report often has a turnaround time of at least 1 day but using “MPG BIM Bots” it takes minutes to an hour to generate a report.

In order to apply BIM-based regulation checks you need to make the regulations machine readable tables. Usually that is not easy because regulations are messy and have lots of subclauses. Nicolas Nisbet from AEC3 demonstrated a solution that can automatically create logical statements from color-coded regulations text. The “AEC3 Require1” tool was built years ago based on experience from Singapore and has been tested on several different regulations with promising results. Although there is limited BIM integration the tool shows potential and hopefully will be developed into a commercial product in the coming years.

The seminar was wrapped up by Francesca Noardo from TU Delft who presented a new workflow for the building permits issuing using GeoBIM. This means the integration of geoinformation (GIS) and BIM which creates the possibility to carry out not only technical checks but also zoning, parking, accessibility and environmental issues. This approach was tested in Rotterdam which has a very detailed digital twin of the city. Francesca also introduced the “European Network for Digital Building Permits” which aims to develop common tools and methods to support the digitization and automation of the building permit issuing process.

The BIM-based Building Permit Process Automation Seminar was hosted by the Estonian Ministry of Economic Affairs and Communications and organized in co-operation with the EU BIM Task Group. The seminar is also part of a series of pre-events leading up to the World Summit on the Digital Built Environment (WDBE) in Helsinki/Tallinn in September 2020.

EU BIM Task Group Co-Chair Milena Feustel gave a great lecture about the EUBTG titled “The EU BIM Task Group roadmap for the digitalization οf the construction sector”and received huge interest at the HELLASCO Conference 2019 in Athens, Greece on 26th September 2019. Several requests for  collaboration were received plus positive feedback about our ambitious work. The Greek hospitality was outstanding too. 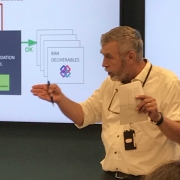 You can download the presentations in PDF format by clicking on the title links: 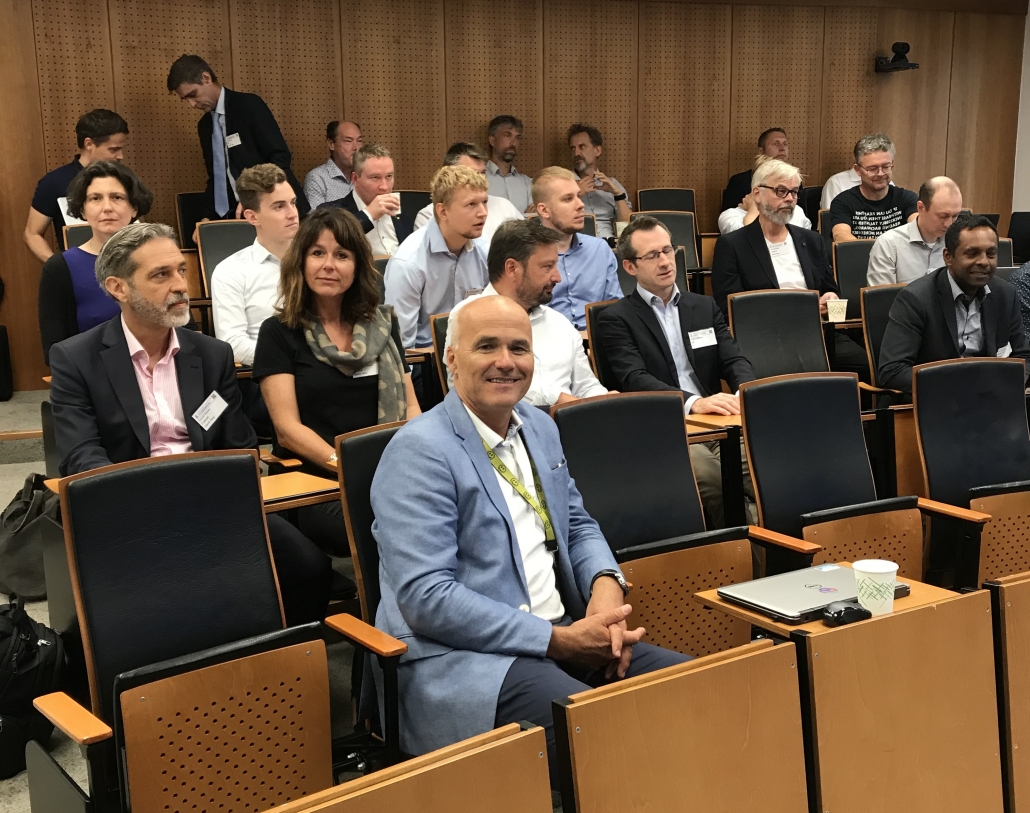 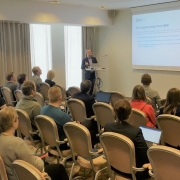 The content was primarily based on the content of the EU BIM handbook with some customisation for each workshop (i.e, local, national context, resources and contacts to be supplied by the appropriate EU BIM Task Group representatives).

Following topics were covered in each session: 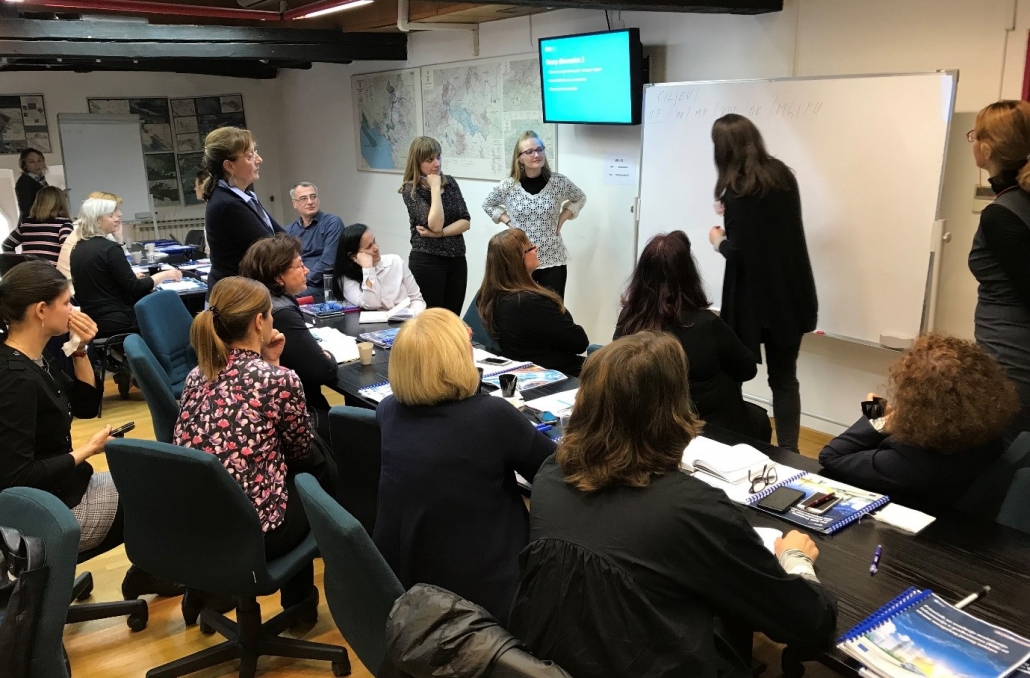 The feedback has been simply outstanding accompanied with strong desire from each member state taking part to receive follow up workshops and refresher courses to support their continuous learning path on BIM as well as to involve more of their in country peers e.g. from neighbouring municipalities to learn about the opportunities to put BIM into practise.